Posted on 6 July 2021 by sergeant gordon

Posted in Toys | Comments Off on MP-52 Masterpiece Starscream Ver.2.0

Posted in Uncategorized | Comments Off on Hololive Figma Nendoroid Figures

Posted on 31 October 2019 by sergeant gordon

From the latest Anime titles to Japan’s most popular cosplayer, expect only the best J-Culture experience and brace yourself for new surprises at C3 Anime Festival Asia Singapore 2019 (#C3AFASG19). Organisers of South East Asia’s biggest and most prestigious Japanese Pop Culture event shared extensive updates on festival and concert elements today, as well as a line-up of the anime industry’s behind-the-scenes talent who will grace the festival as guests.

With premiere screenings, day stage programmes, competitions and dedicated experiential zones, the three-day festival from 29 November to 1 December 2019 will be a celebration of the latest and best curated content and experiences for anime fans and Japanese pop culture enthusiasts.

Organisers announced its latest cosplay guest, Enako. Japan’s top cosplayer with a fan base worldwide, the multi-talented cosplayer is a voice actress as well and is frequently seen on TV and magazines. She will be the official Seika cosplayer for #C3AFASG19. Fans of Enako can also have a separate meet & greet session with her during the event. The guest cosplayer line-up includes Baozi & Hana, Hakken, Hikarin, Hiko, Hiroto, Mon, and Singaporean cosplayer Rithe.

The AFA Film Festival, held for the first time in conjunction with #C3AFASG19, will host a curated line-up of anime movie screenings and concert films. Titles include the first in Southeast Asia screening of the Frame Arms Girl Movie: Kyakkya Ufufu na Wonderland, a story of a school girl’s adventures with a petite autonomous robot. A special screening of CENCOROLL CONNECT, directed and animated by Atsuya Uki, will also be held. Concert films include popular supernatural idol girl group Zombie Land Saga LIVE: Franchouchou Minna de Orabou IN SAGA and ONE PIECE STAMPEDE. More details and more titles for the Film Festival will be shared closer to date.

Fans who are keen to glean insights from behind-the-scenes experts, from voice actors (seiyuu) to composers, will have a chance to hear directly from them at the Day Stage.

More than 10 seiyuus will take the stage including: Eriko Nakamura, Saki Fujita (from YuruYuri), Satomi Arai (from A Certain Scientific Railgun T), Asami Tano (from Zombie Land Saga), Satoshi Tsuruoka (from Fate/Grand Order), Reina Ueda and Azumi Waki (from Null & Peta), Miho Okazaki and Chikahiro Kobayashi (from That Time I Got Reincarnated as a Slime), Ai Kayano and Yoshitsugu Matsuoka (from Saekano the Movie: Finale and Sword Art Online Alicization: War of Underworld).

Producers from MAPPA Manabu Otsuka and from CyGames Nobuhiro Takenaka, who worked on Zombie Land Saga franchise will also be at the event to share their experience.

Fans of the popular humanoid cats game NEKOPARA will also get the chance to see the premiere of the first anime episode in C3AFASG19. Producers from the anime will also share insights on the upcoming TV anime. Besides that, fans will also be able to purchase official NEKOPARA merchandise, exclusively available in the exhibition area.

With dedicated zones in the area, a multitude of experiences from gaming to competitions and exclusive merchandise await every festival-goers. Enjoy a delicious treat at the Food Street before diving back into the action.
Updates on the key zones include:

● AFA PLAY Zone: The new dedicated zone will include a Naruto x Boruto: Ninja Selection Exam, an escape room concept revolving around their iconic ninja exam featured in the anime. Players of all levels can take part in the Auto Chess tournament, a brand new, highly competitive multiplayer online strategy game by Drodo and Dragonest Co.Ltd. This is in addition to Art Duel, a regional competition where aspiring illustrators from different countries battle against one another. Finalists from each country are then invited to #C3AFASG19 for a one-on-one knockout competition, to decide the one true Art Duel Champion. Prizes are sponsored by XP Pen. More contents and activities to be announced soon!
● Akiba Stage: Aside from the much-anticipated annual Ikemen Series Standee Raffle, fans can also enjoy I’m Sora Project’s very first live stage performance at the Akiba Stage. Other programmes include a special autograph and photo session with Cosplayer Hiroto, the official Cosplayer for Ikemen Series.
1 Separate Meet-and-Greet Sessions will be available for these guests

● AFA Shop: For the first time, AFA Shop will release three capsule collections that can be pre-ordered prior to the event, through afashop.co. They include I Love Anisong 2019 Official Merchandise, C3AFA Singapore 2019 Official Merchandise: Fun Texts (3 t-shirt designs utilizing quirky Japanese-English fusion lingos), and AFA Airways merchandise. In addition, fans can expect an array of official anime and artiste merchandise, to be shared closer to date.
● Food Street: Expanded with more than 10 stores, the Food Street will take on a Japanese Matsuri theme. Festival-goers can look forward to a curated selection of food and drinks, ranging from Japanese cuisines by IPPUDO EXPRESS, Renga-ya and Sinful Cold Soba, to satisfying your trendy bubble tea needs with Tiger Sugar. Keep an eye out for the adorable Captain AFA-kun at all Tiger Sugar outlets!
● Muse X Hakken! Inaugural Themed Experiential Booths: Enter the digital world of Sword Art Online Alicization or take a step into the fantasy world of That Time I Got Reincarnated as a Slime. Strike a pose with your favourite characters from this two featured anime. In addition, the first 1,500 visitors who visit the theme booth and like Hakken!’s Facebook page will receive a $2 off voucher for the Muse X Hakken! Retail Booth.
● For the first time outside Japan, MAPPA – Japan’s renowned animation studio – is bringing “MAPPA SHOW CASE” to C3AFA Singapore this year! Check out some of the exclusive behind-the-scenes gallery showcase featuring hit anime.
Exhibitors include CYBIRD, which has just released the English version of the hit Japanese smartphone game A3!. Manga fans can try JUMP’s free Manga App – MangaPlus By SHUEISHA, and check out exclusive anime goods and merchandise from Muse X Hakken! retail booth. BANDAI SPIRITS will present their latest Gunpla and plastic model kits from various anime titles and BANDAI NAMCO Entertainment will exhibit a series of demos for their upcoming video game releases. Featured titles will be announced closer to the event date.

miHoYo will once again grace #C3AFASG19 with its ever-popular RPG game, Honkai Impact 3, bringing with them exclusive merchandise and official character cosplayers. If you are feeling lucky, try your luck at the Ichiban Kuji booth, a product by Bandai Spirits with sure-win tickets. The asobi! booth by Genesis Frontier will bring extraordinary experiences to visitors with various game demonstrations. Fans of Fate/Grand Order can check out the Aniplex booth to try out Fate/Grand Order Duel and purchase official merchandise. Kotobukiya will bring in prototype figurines that are slated for release in 2020, such as Ikemen Joker, Kimetsu no Yaiba, and Bishounen DC models. XP Pen, the official prize sponsor of Art Duel, will present their latest range of digital art tools for aspiring artists to try out. Royale Ergonomics will showcase its customisable range of gaming chairs, and has designed the Official Gaming Chair for #C3AFASG19 in conjunction with SOZO.

Posted on 9 August 2019 by sergeant gordon 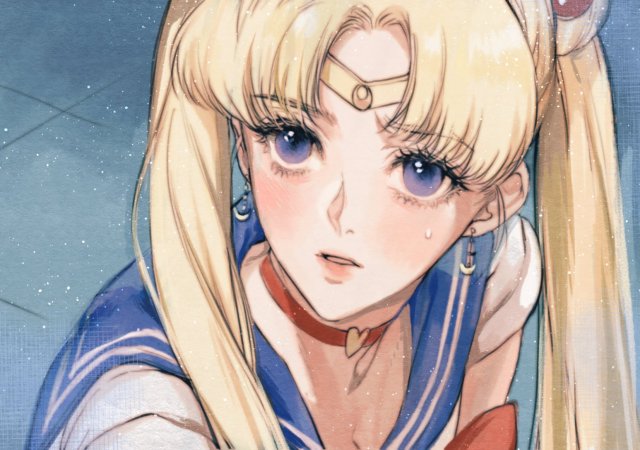 Posted in Anime, Artwork | Comments Off on Sailor Moon

Posted on 7 July 2019 by sergeant gordon 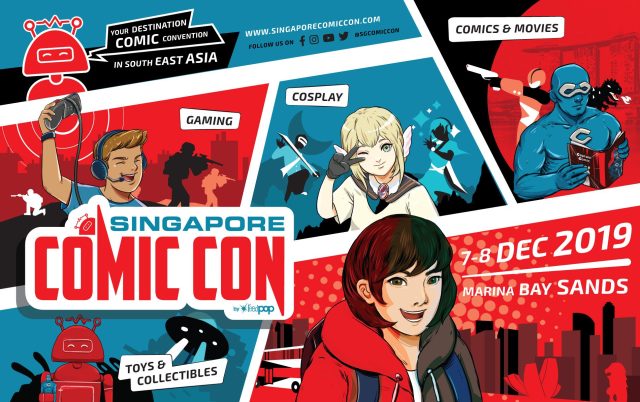 If you have been living under a rock the past year, here is what you missed. The one and only western pop culture convention in Singapore formerly known as Singapore Toy, Game and Comic Convention (STGCC) is now re-branded as Singapore Comic Con (SGCC) and has shifted its usual September date to 7-8 December. It will also move its venue from the basement of Marina Bay Sands Expo & Convention Centre back to level 1 (Halls A, B and C).

With a stellar line-up including DC Comics illustrators and toy designers, the December convention will not disappoint! Meet & greet with three-time New York Times best-selling artist Jock, famed for his artwork in graphic novel titles such as 2000 AD, Wolverine and award-winning Batman: The Black Mirror series. 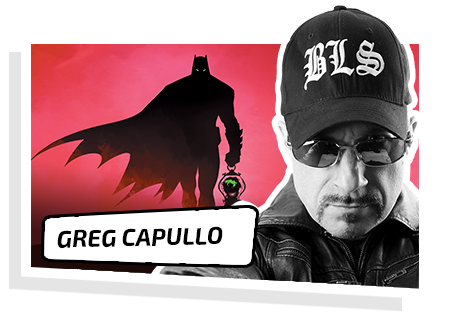 Alongside Jock will be fellow Batman comic artist and penciller, Greg Capullo, a legend in the world for comics who is also known for his works Spawn and X-Force.

The two-day extravaganza will also see pop surrealist Tara McPherson who has been known for creating art pieces that explore the realms of otherworldly characters which are born from complexities of the human psyche.

Gaming geeks are in for a treat with this year’s GGXP. Celebrate all things esports at PVP @ Singapore Comic Con by Singtel! The stage will be set for gaming fans to rub shoulders with professional gaming influencers and celebrities, experience exclusive industry showcases such as AR and VR in gaming, witness the finals of the PVP Community Leagues featuring Mobile Legends: Bang Bang and DOTA 2, and much more. Additionally, amateur gamers will also stand a chance come together for some friendly competition; attractive prizes are up for grabs!

SGCC’s Tabletop experience with Gamersaurus Rex will explore miniature tablescapes and battlefields laden with a myriad of terrain features where players can enact battles between opposing forces using beautiful hand painted miniature models. Some games featured will be Warhammer 40,000 and A Song of Ice and Fire. Role-Playing Adventure Game freshies will even have a chance to learn the art of tabletop warfare during Dungeons & Dragons role playing sessions!

Posted in STGCC | Comments Off on Singapore Comic Con SGCC 2019

Posted on 3 July 2019 by sergeant gordon 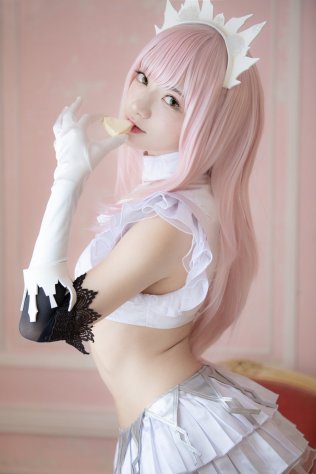 One is a drawing and the other a photograph. Guess which is which?

Posted in Cosplay, Uncategorized | Comments Off on Insane Drawing Skills 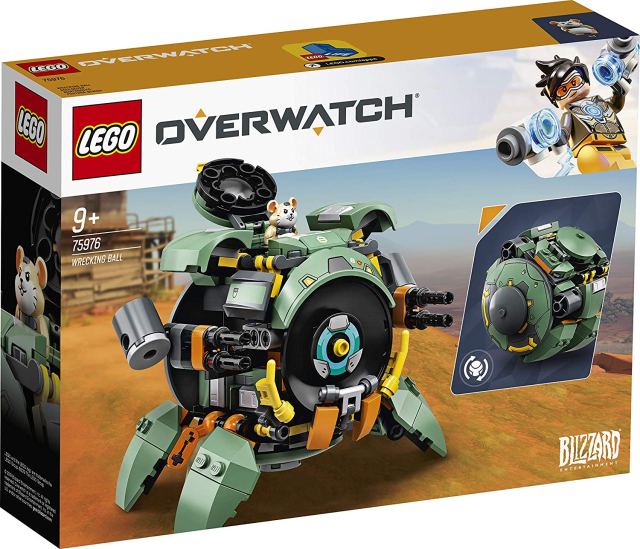 Both sets are scheduled to be released in October 2019 with a suggested retail price of USD20 for Wrecking Ball and USD50 for Junkrat and Roadhog.