Posted on 6 August 2012 by sergeant gordon 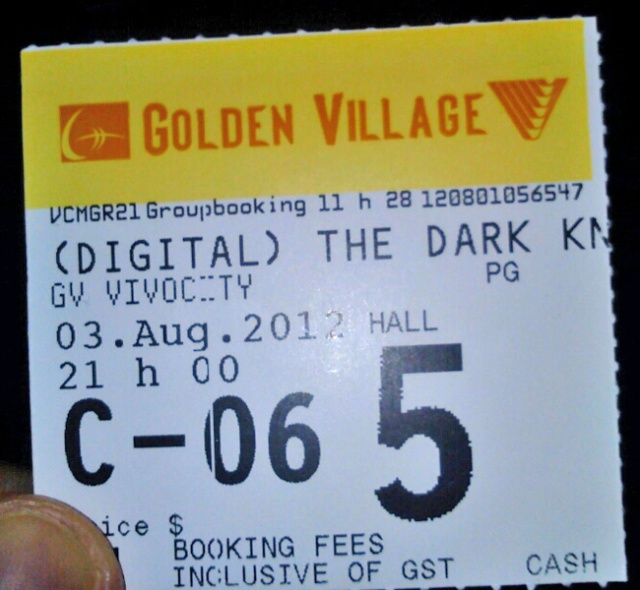 Last week, OMY.sg sent out an invite to bloggers to watch The Dark Knight Rises movie and to have pizza at Domino’s Pizza, who happens to have some Dark Knight pizza promo right now. I was without a doubt delighted to know of this good deal, though I have already seen The Dark knight Rises, I really don’t mind seeing it again since it’s such a good movie. And to have pizza as well, that’s really icing on the cake! So thanks once again OMY for this great kangtow. Furthermore there were 60 pairs of tickets to give away so I am relatively sure many of us will be able to get in.

So when something this good looks too good to be true, maybe it is?

On the day of screening, I received an sms from OMY that there’s some miscommunication between the organizer and the original invite which was 2 tickets per blogger was changed to 1 per blogger instead. Not only was this announcement sudden and out of the blue, that also means I have to break the news to my friend who was going to see the movie with me. As a man of my words, since I already jio my friend to watch the movie, I cannot just tell him that the organizer cocked up and now only 1 of us gets to see the movie. I would look like a selfish bastard if I tell my friend sorry he cannot come anymore right? Since I already saw the movie, I asked my friend to see the movie on my behalf. He was OK with it.

I thought this little setback was the end and last worry for what was supposed to be a fun filled evening but later that night, I received word from my friend that the movie started only after 9pm and by the time the movie ends, it was already 12am and there was no trains in service anymore. Since OMY informed us to gather at the cinema at 7.30pm to collect the tickets, I wonder why the movie would start 1.5hrs later? OK one can say remember there’s pizza right? But according to my friend, there was actually no pizza served that night. Maybe something went wrong? I have no idea really. And so in the end, my friend only received a Domino’s Pizza voucher instead prior to entering the cinema. So that means he was hungry for the whole night. I feel sorry for my friend. No food and no public transport to go home. =(

So all in all, I am a little saddened by this series of cock ups. It looks bad on me as I am the one who jio my friend to go. So just my most humble 2 cents to the organizer, if there are going to be cock ups, maybe it is best to cancel the event a day before it starts and reschedule it another day. I have years of event management experience myself and I know cock ups are avoidable. So sometimes to cancel an event and postpone it is better than having all the guests went home with a bad experience. But hey, maybe I am the only one who felt this way, maybe the other 59 bloggers who went don’t mind? I believe in giving constructive feedback so I hope my opinion will be of use and I will not be banned from future OMY’s invites. ^^;

Lastly, I almost forgotten to introduce my friend, his name is Ryuuji Kentaro, in case you are wondering, that is just his nickname, he is not an actual Japanese. Below is his thoughts of the event.

I was down at VivoCity on the 3rd of August to watch The Dark Knight Rises thanks to Domino Pizza as this event was to thank all the Domino Pizza supporters and Blogger fans by treating to watch a late-night movie with Domino’s.

This came about to the success of their movie tie in for a promotion at Domino’s, which this is the first ever tie-in that was very successful compared to other movie promotion tie-in. The queue on the day itself was pretty long at the time where the booth was ready.

Everyone whom attend the event recieved a goodie bag, which there was 3 posters, a The Knight Rises Mug and a sticker set. We also recieved a folder, which has a letter of appreciation and along with the movie ticket to enter the theater to watch this movie.The movie started at 9pm, and ended at 12 midnight. This epic conclusion to this trilogy really is great, I would also want to recommend everyone to watch it too.

On the ending note, I would like to thank Domino’s Pizza for this event. Hope to see more of this kind.

Bah bah bah yada yada yada
View all posts by sergeant gordon →
This entry was posted in Uncategorized. Bookmark the permalink.
%d bloggers like this: